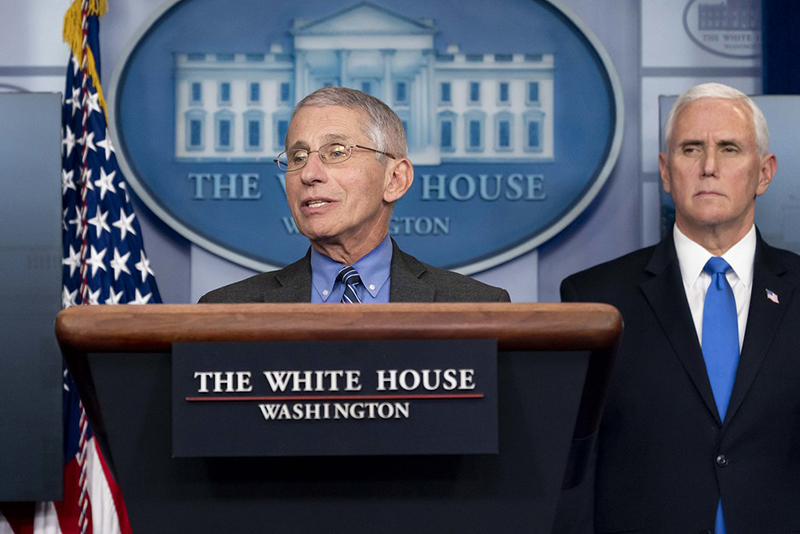 Fortunately, the public no longer has to listen to daily briefings by Fauci and Birx, two of the most incompetent doctors in the U.S. In my opinion, both should lose their jobs and Fauci should lose his medical license (Birx no longer holds a medical license) because they used bad information provided by unreliable sources to make policy recommendations that resulted in death and devastation throughout the U.S. Many people might refer to this as malpractice.

Suicides and overdose deaths increased exponentially as people became despondent over factors like isolation, economic ruin, and food insecurity. Child and spousal abuse increased. Murders increased. Nursing home patients died as a result of neglect when family members no longer could visit and supervise their care. People died who could not access medical treatment while hospitals and other facilities were closed and all resources were set aside for the COVID patients who never showed up.

The debacle starts with a model developed by Neil Ferguson of the Imperial College of London which predicted that tens of millions of people would die due to COVID-19 infection. COVID-19 was compared to the Spanish flu, which killed approximately 50 million people in 1918. Ferguson’s report stated that the only way to prevent massive deaths would be for the entire population of the planet to be locked down and for people to remain separated for 18 months until a vaccine was available. Total isolation would be needed because the isolation of just vulnerable populations like the elderly would only reduce deaths by half.[1]

Ferguson’s report was deemed so convincing that the World Health Organization, which had previously stated that lockdowns were not effective for containing infectious diseases, recommended that the world follow China’s example, which included mandatory lockdowns and contact tracing.[2]

As of June 8, total deaths worldwide had reached 410,000 – not tens of millions – and even this number is questionable. This time Ferguson was off not by thousands or hundreds of thousands – but by millions. And the average age at death was 80, with almost all who died having multiple co-morbidities. This hardly justifies destroying the lives of hundreds of millions of people by locking them down.

It seems that people who claim to be as smart as Fauci and Birx might think to check out the track record of the person who recommended such extreme measures prior to taking action. I’m regularly told by my critics that I’m not nearly as smart as Fauci, yet we do this type of checking in our office as standard procedure. One might also assume that the World Health Organization would check out Ferguson’s track record prior to making decisions that would affect over seven billion people. Apparently not. Yet there are those who still listen to and revere these doctors and the WHO. Amazing!

A group of researchers at Stanford Prevention Research Center published an article on June 11 expressing significant concerns about both the models, some of which were not accompanied by any disclosure concerning methodology, and the actions taken in response. What resulted was a misallocation of hospital resources, and unjustified delayed healthcare for non-COVID patients. The researchers also point out the negative impact on mental health, increased unemployment, the loss of health insurance, prospect of starvation, and the potential spread of other infectious diseases as just some of the negative consequences of the grossly incompetent actions of Fauci and Birx and their brainwashed followers.

Here are some examples of the disparities cited between predictions and reality in individual states:

Prediction: up to 140,000 hospital beds and 40,000 intensive care units with ventilators would be required

Reality: 18,569 hospitalizations and 4908 intensive care units required. (Predictions almost 87% off on both)

Reality: 1232 hospital beds, 245 ICU beds and 208 ventilators required 92% and 90% off respectively), projected loss of $3.5 billion in revenue by Tennessee hospitals by June 30 as a result of cessation of non-COVID patient care.

Projection: up to 1.2 million beds would be required.

Reality: COVID patients occupy less than 5% of California hospital beds, and less than 20% of ICU beds

Massachusetts General Hospital projected over 23,000 deaths in Georgia within a month of opening the economy and the actual number was only 896 (almost 96% off).

The Stanford Group listed reasons for this debacle which included lack of expertise; groupthink and the bandwagon effect; and selective reporting (otherwise known as lying). In other words, top health officials in the U.S. and in many states were incompetent and willing to blindly follow what others said without question, and then lied about it.

The researchers also note that this is not a new problem and expressed surprise that forecasting is still used given its “dubious track record.” One of the reasons, they say, is that there are no serious consequences for people who make these bad decisions. To this point, as of the writing of this article, Fauci and Birx have not been criminally indicted for the death and destruction they have caused, and have not even been fired from their jobs.

The Stanford group goes on to write that even if a calamity the size of which the models predicted were to occur, policies like lockdowns have little impact on the death rate and generally do more harm than good, and add that exaggerated forecasts “…may cause more harm than the virus itself.”[5]

It’s somewhat amazing that in view of his colossal failure, Fauci now has the nerve to say that the problem is not him or his incompetence. It’s Americans. Instead of an apology, he takes us all to task in a recent podcast, stating that “…for reasons that are…inconceivable and not understandable – they just don’t believe science and they don’t believe authority.” He goes on to say that “science is truth,” which is true, but Fauci has not used science – he used information provided by a known charlatan who had been grossly mistaken before. Not able to help himself, he likens those of us who listened to him lie every day on national television and determined that he was a fraud to “anti-vaxxers” who do not want to be vaccinated even though, according to Fauci, the science clearly supports their safety. He never backs down, never admits he’s wrong.[6]

We must do everything possible to make sure that Fauci, Birx, state health directors, and elected officials will at some point stand trial for their crimes against humanity. And we must take back our freedoms and liberties and our government so that this can never happen again.

[3] National CJD Research and Surveillance Unit. “Disease in the UK (By Calendar Year.” University of Edinburgh May 4 2020

BEST-SELLING FOOD OVER MEDICINE ON AUDIBLE.COM

This website uses cookies to improve your experience while you navigate through the website. Out of these, the cookies that are categorized as necessary are stored on your browser as they are essential for the working of basic functionalities of the website. We also use third-party cookies that help us analyze and understand how you use this website. These cookies will be stored in your browser only with your consent. You also have the option to opt-out of these cookies. But opting out of some of these cookies may affect your browsing experience.
Necessary Always Enabled
Necessary cookies are absolutely essential for the website to function properly. This category only includes cookies that ensures basic functionalities and security features of the website. These cookies do not store any personal information.
Non-necessary
Any cookies that may not be particularly necessary for the website to function and is used specifically to collect user personal data via analytics, ads, other embedded contents are termed as non-necessary cookies. It is mandatory to procure user consent prior to running these cookies on your website.
SAVE & ACCEPT